It is Aug 25th, 2012 and it is one of the hottest days of the summer and 50 people have gathered at the Lochaber Bay Cemetery to celebrate 100 years since the 1912 reunion that was so well attended, photographed and documented.

The following is a collection of notes, descriptions and pictures put together to try to capture the event for posterity. Most of what you will read comes from Harold Blount's notes used to MC the event along with his recollections 8 months later.

People started to arrive at 12 noon on the 25th to enjoy a BBQ picnic and meet friends and relatives of the cemetery and family connections from Lochaber Bay.

As you can see from photos, we managed to put up some old pictures and family trees under the canopies to inspire stories and get people comparing notes.

By 2PM, the piper started to play and the Highland Dancer started to entertain us much like was done September 13th, 1912.

Here is how Harold addressed the gathering with notes on other speaker's words:

In 1912, after the Highland Dancer and piper performed the Highland Fling, it was reported that the applause and shouts were so loud and insistent, that they had do repeat the Fling before anybody would settle down. So ... what did you think??

Hello and welcome everyone to the Lochaber Bay 1912-2012 Reunion! My Name is Harold Blount - I think I've met many of you now through emails, phone calls and letters – thank you for coming!

One day in early June of this year, Bill McLachlan and I found ourselves painting the fence here at the cemetery. It was a sunny day and we had just taken a break for lunch in the shade of the trees on the east section of the cemetery when we saw 6 hikers walking down the road with backpacks. Curious, we motioned them over to join us for lunch. We shared some banana bread with them and they told us their story.

As it turns out, these six hikers were on a 10 day pilgrimage from Ottawa to Montreal organized by Chemin des Outaouais! Denis, their leader, was very curious about this cemetery (we had lost our sign at that point!) and was quite surprised to learn that it was a Scottish Cemetery. He could not understand how this cemetery came to be in what now is a very francophone neighbourhood! Let me tell you the story as told by Norman A MacEachern in a paper he wrote in 1959 :

In the early 1800's, three men born in Argyllshire Scotland, married three MacDonald sisters and emigrated to Canada during that troublous time known as the "Clearances". From 1803 to 1823 the lairds of Scotland were clearing the crofters off the land, burning their small cottages and turning their small fields into sheep pastures. It is reported that one bedridden old lady could not get out and was burned in her cottage. It was indeed troublous times, and it is no wonder our ancestors braved three months in a sailing vessel to cross the broad Atlantic Ocean and start a new in a wilderness called Canada.

These three families came up the Ottawa river and settled here in Lochaber Bay. The three MacDonald sisters were Marion, Margaret and Mary! Marion married Duncan MacEachern ; Margaret married John McCallum and Mary married Robert MacLachlan. Five of these six people are buried here in this cemetery marked by three headstones (F6,D10,D1) We have no record where Margaret is buried.

I would now like to introduce to you my 2nd cousin once removed – Bill McLachlan! He lived down the road from here as a boy and has some great memories of this area to share with us!

Bill's My Lochaber speech can be found here. 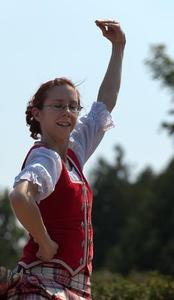 In 1912 on September 13th, our forefathers came together in this community at a grove around Fletcher MacEachern's farm to celebrate 100 years since THEIR forefathers came up the Ottawa river and decided to settle this land.

There was quite a party here according to the accounts recorded of that event. It is hard to decide what the main event was – the Highland Dancer, the speeches and heckling from the crowd or the food. One after another, people would stand up and talk. My grandfather D W McLachlan was quoted trying to right imaginary wrongs by saying "We have too many religious denominations Why are we not all Presbyterian?" You can imagine the heckling he got from that – which I think he quite enjoyed!

Religion was probably a touchy subject. There is a story that describes some arriving Scottish settlers in the early 1800s who were not Baptist. When it was found out that they had not been properly baptized (full body submersion in the river), they were not allowed to attend the Baptist church. Come Sunday they had to paddle across the river to Clarence to attend the church there. Things were not always easy here in days gone by!

In modern times, one thing we always try to do at our cemetery gatherings is have someone "of the cloth" reflect on life and give us some words of wisdom. Today I am pleased to introduce to you Reverend Stephen Hayes as our Guest Speaker!

(It has been 10 months since this event and I can't honestly remember all of Reverend Hayes speech, but I seem to remember it was about how important it is for us to keep touch with our past and how when we leave this world it is a sign of a strong and healthy society that keeps memories of us alive and thus making us live 'beyond our time').

Some of the oldest headstones and burials at this cemetery are James Campbell buried 1845 and Alexander McCallum buried 1839 (John McCallum's father). I can't tell you a lot about the history of the Cemetery other than to say that for over 100 years there has been a Committee looking after the cemetery. In 1936 the cemetery was incorporated with Letters Patent under the seal of King Edward the Eighth - before he abdicated. The Directors were John C McCallum, Rory MacLachlan and Fletcher MacEachern - all noted as farmers from Mason.

Today we have a board of six directors. Can the directors please stand up and I'll introduce you!

I'd now like to ask Bill Lamb – our secretary/Treasurer – to say a few words!

(Bill described a time when he was a boy doing some chores for Rory and was told to go into that field over there and see how many hammers you can find. The reason there were so many possible hammer-finds in that field was because Rory did not like the bull in that field many years ago and every time he would pass by he would through a hammer at it to tell it who was boss!)

A hornpipe – Laurie and Nico 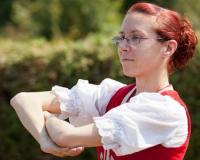 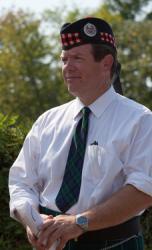 At this time I would like to thank St John Ambulance for attending our event as well as everyone that has helped set us up today and cook up and serve those fabulous burgers – and for supplying the Burger Machine!

I'd also like to thank Laurie MacEachern and Nico Gravel for coming out and dancing and piping for us with such great enthusiasm and also a hearty thanks to Menno Spijker and family for the pictures and being our event photographer!

I would also like to thank Reverend Stephen Hayes for joining us to day and for being such a great guest speaker!

Now we are going to get up and stretch our legs and take some pictures and then sing Auld Lang Syne hands together in amongst the headstones. But first I want to tell you what they did in 1912 - they took a picture of ten Old Boys average age of 75 - that was considered an amazing achievement back then!

So - all those that are a proud 80+ years of age, we would like to take your picture first and record YOUR achievement in this year of 2012! Then we will take a picture of everyone together – that is everyone including the Highland Dancer and Piper and St Johns Ambulance members and volunteers including Sasha.

Remember to take your program with you with your name on it and hold up the number in front of your face for the FIRST picture ONLY. I would suggest you quickly memorize the words to Auld Lang Syne because when we come to holding hands singing Auld Lang Syne it might be tricky to hold a piece of paper in your hands.

And with that, we took more pictures, sang Auld Lang Syne and packed up!

Check out our pictures here ⇗ (thanks Menno!) and more pictures taken by Marion here ⇗ and some higher definition (the group shot!) here ⇗ .