It's been a while since we've communicated with many connected to the Lochaber Bay Cemetery.

In this news letter:

First off, we are planning a Memorial Service next year!

Last year we worked on the fence and replaced some more boards and painted. This year it seems to be holding up and looks great. Even the green benches are looking great!

Thank-you to the volunteers who came out and for those that dropped in for a social after! 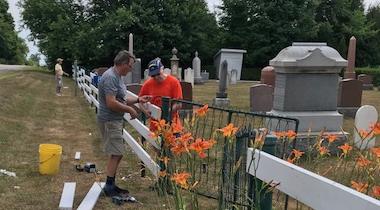 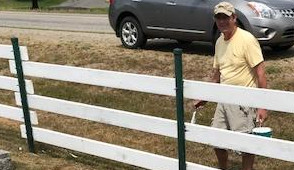 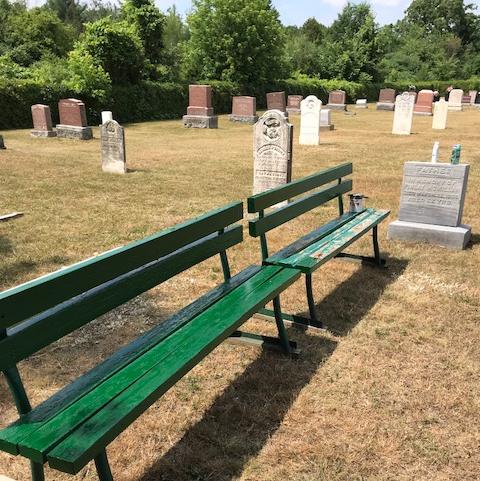 The hedge is getting out of control but this summer we have Sharlene Newton and her son Quinton working on a major brush control and hedge trimming project and we hope to see improvements shortly!

Charles was a pilot with the RAF in WWII, became an Professional Engineer (Marine) and worked for CN Steamship Line, Loyd's and later the Canadian Coast Guard College. Charles is survived by his wife Frances Robertson (nee MacLachlan). Frances is the daughter of Angus Campbell MacLachlan who wrote the book 'Lochaber - My Well Loved Country Home'.

Bill has been involved with the cemetery since 1957 where he was 'put in charge' of the cemetery renovation. He was tireless in his drive to do this renovation properly. Under his direction, he expanded the cemetery, managed the infill with many dump loads of soil and sand, built the fence and many other tasks. With out his efforts, the cemetery would not be what it is today.

As Secretary-Treasurer (1957-1960), he took impeccable notes and greatly assisted in the organization of countless spring Cemetery Services. He continued his service to the cemetery as Vice-President 1960-1975 and President 1975 to 2002. In 2014 Bill decided it was time for him to retire from the board of directors - but still his unabashed opinions were present and appreciated in many of the cemetery activities!

Heather's father Duncan William MacLachlan was born and raised on the MacLachlan farm in Lochaber Bay. Heather went to school in Ottawa and later University of Toronto and married Robert Blount and raised a family of 4 in Peterborough, Ontario.

Bill Newton, our care taker of 27 years, passed away last July. Bill watched over our cemetery with infinite care and was always eager to help fix a problem, make sure a burial went well and kept our grass and hedge trimmed and looking good.

Bill will be greatly missed, not only for his hard work at the cemetery but for his enthusiasm in telling yet another story of the Lochaber Bay region and it's people along with some of his own adventures!. It was always a pleasure to talk with Bill!

Wife of Bill McLachlan and ardent supporter of the cemetery, Phyllis had many passions including her love of animals and music and of course spending time with family both in this region and in Nova Scotia.

Phyllis passed away suddenly on May 30th, 2018 in Ottawa. Obituary ⇗

Eleanor's father Rory MacLachlan was a cousin of Duncan William MacLachlan and worked the MacLachlan farm in Lochaber Bay for many years. He is noted for his stories about his bull and was a signature on the Lochaber Bay Cemetery Letters Patent (1936) as a farmer from Thurso.

Eleanor passed away in Toronto in February 2018 at the age of 103 years and 6 months and is survived by a sister Laurie Templeton in Victoria BC.

Ora passed away on September 27th, 2017 and is buried in the cemetery along side her husband Frank Lamb. Ora was a great supporter of the cemetery and was always present at our gatherings offering homemade sandwiches and great conversation! Obituary ⇗

To see all these MacLachlan / McLachlan connections, click on this link to the Family Tree ⇗ .

The Story behind the Headstone 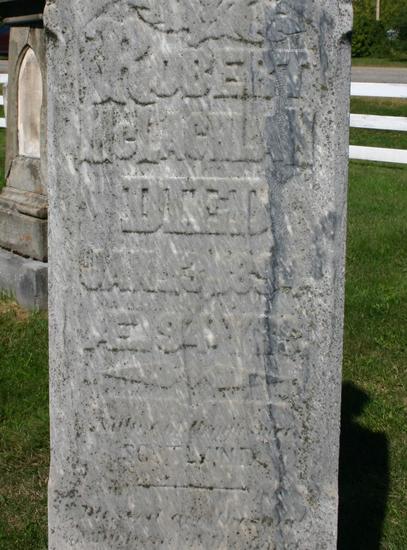 It is mid-1830 and Robert has just spent 4 years in Breadlebane (Vankleek Hill) with his father John after emigrating from Scotland with his wife - Mary McDonald. They are on a river boat coming up the Ottawa River with the promise of land and ownership - provided they clear a percentage for farming.

They are not the first to be promised land from the McMillan tract and are welcomed by the Campbell brothers and Lambs who have already established themselves on the shores edge .. later to be known as Lochaber Bay.

Who gets the good land and who struggles with the rocky brush was likely determined by who came first. Judging from the present-day, Robert's father John was a lucky one! His lot (L27 R2) runs south of Linda Road towards the Bay in what appears to be rich soil with little rock. On the other hand, Robert's lot (L25 R3) runs north of Linda Rd and to this day has not been fully cleared and does not appear nearly as fertile.

For some reason, John does not stay long in Lochaber and either moves on to the Carolinas or back to Scotland. Robert, on the other hand, settles successfully and has a family of 10! Robert continues his trade as a blacksmith and now farmer. Eight of his ten children are eventually buried in the same cemetery as he. Sadly, his son Robert (b 1838) contracts pneumonia after serving jury duty in Hull and dies in Dec 1893 at age 59. His father passes away 3 weeks later at age 94. 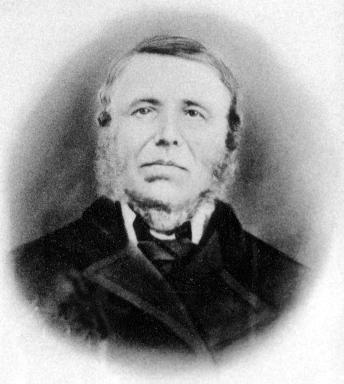 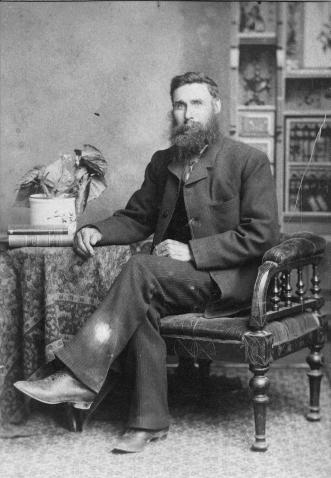 The descendants of Robert Sr lived in the Lochaber region for many generations marrying McCallums, McDonalds, Campbells, McDerminds and Lambs to name just a few. The legends of the blind brothers (Donald and Bobby), Rory and his bull, Dr Pete of Buckingham and of course the writings of Dorothy Lamb enrich the memories of the region and are all connected to Lochaber Bay Cemetery in multiple ways.

In a quest to try and figure out who lived where, we've put together an incomplete map of the region with dates and family names mostly from the 1900s.

Check it out here: Lochaber - who is where ⇗ and feed us any corrections!

Well as you can see, we are not great at facebook but we do respond to emails and over the years it is amazing what stories and new connections we have made through the Lochaber Bay Cemetery website.